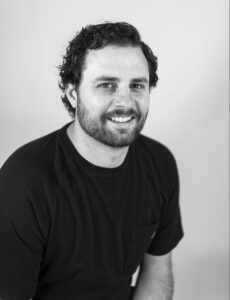 Billy Hague is a father to three Madrone Trail Students and a fourth as soon as she is old enough to attend kindergarten. After bouncing around between a few different schools, Madrone has been exactly what the family needed and they have found a place where the kids love to be and have been developing a love for learning, curiosity and creativity. The entire family is grateful for this school and how it approaches education.

Billy grew up in the desert in Southern California east of Los Angeles but met his wife, Kristin, while attending Multnomah University in Portland Oregon. He graduated with a degree in Bible and Theology, a second major in pastoral ministry, and a minor in New Testament Greek. After graduating Billy and Kristin got married and moved back to Southern California where he worked as a youth pastor and high school teacher in a Christian school. Billy and Kristin did everything from mentoring, teaching, to leading the associated student body and planning homecoming dances and school events. Billy also sat on the elder board of the church.

Six years ago, they relocated to Medford, Kristin’s hometown. Billy has worked as an associate pastor at Rogue Valley Fellowship in West Medford overseeing youth, small groups, and community engagement. His work there has included building relationships with the local schools and working alongside educators at Central High School to support the students there. He also sat on the Families Matter Committee for the Jackson County Community Health Improvement Plan. He hopes to benefit his community and contribute wherever he can. When he is not working at the church or in the community he likes to cycle, run, read, and spend time with his family as well as root for all the LA sports teams, except for the Clippers.

Billy is grateful and excited to get to serve on the Madrone Trail Board. He hopes to benefit this community through humble service and willingness to listen to the community as a whole to see it thrive.