The culmination of their time at Madrone Trail, eighth grade is rich and dramatic.  A class trip cements and deepens these friendships as the children prepare to launch into their high school years.  The year culminates in a wonderful graduation ceremony, looking back and celebrating all they have experienced and achieved.

“A basic tenet underlying the teaching of History in the Waldorf curriculum is that the period studied should serve as an “objective correlative” to the developmental changes occurring in the body and the soul of the student.  With the advent of adolescence, eighth graders are undergoing a re-formation of the bodies and a transformation of their souls.  As they experience the sometimes tumultuous clash of forces within and without, it is appropriate for us to study the periods of European history demarcated as “the Reformation” and the “Age of Revolution.” ~Eugene Schwartz 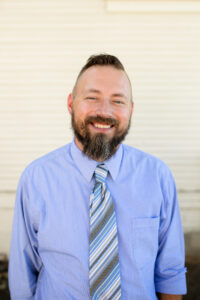 David Grosenbach was born and raised here in the Rogue Valley. He spent most of his formative years in Rogue River, graduating in 2000 with 82 other seniors from Rogue River High School. He grew up playing football, starting in the fourth grade with flag football and continued all the way to his senior year where he was 2nd team all-conference as an offensive guard and honorable mention as a defensive end.  He was recruited to play football at Southern Oregon University, but wasn’t offered any scholarships, so he was unsure how he was going to pay for school. As luck would have it, a recruiter for the Army National Guard showed up at his school, and he was hooked. Now he could play college football, and also serve his country.
After he graduated, he went to basic training. He came back and thought he would play college football and earn a degree. Then 9/11 happened. He was called to serve his country, and did so for fifteen years. He was deployed to Egypt, Afghanistan, and Iraq. He was also called up to help with flooding in Ashland, hurricane relief in New Orleans, and to help fight fires. He also spent two years as trainer where he had a hand in training over 20,000 soldiers, sailors, airmen, and marines in getting ready to go to Iraq, Afghanistan, Guantanamo Bay, Egypt, and various other places.  He also spent a year as security forces at Kingsley Air Field. He loved his time in the military and loves talking about it.
After he got back from his last overseas deployment in 2010, he was ready to settle down and establish some roots.  Between September 11, 2001, and September 23, 2010, he had spent eight years away from home, even though the National Guard was supposed to be only one weekend a month. He enrolled at RCC to start his prerequisites. Initially, he thought he wanted to be a nurse, but it didn’t take him long to figure out that he didn’t want to do that after all.  He knew he wanted to do something worthwhile and something where he felt like he was contributing to the well-being of the country.
During his time as a sergeant in the army, one of his main jobs was to be a leader and teacher to the men and women under his command. He grew to love this work and decided his future was to be a teacher. He received his teaching degree and started working at Shady Cove Middle School.  He loved his time there, but shrinking numbers wouldn’t allow for four middle school teachers, so he was let go, being the lowest man on the totem pole. What was Shady Cove’s loss, has become Madrone Trail’s gain. He loves being here and looks forward to each day that he gets to share this journey with his students.